Let’s start with the how not to:

I’ve read dozens of opinion pieces, comments, tweets along the lines of “See, nothing happened!?!” I’ll argue two points here: First: Compared to how the other opponents try to shoot you from afar, being touched in the side, having words that you don’t understand whispered into your ear and being choked (to death, if you fail the quicktime event) is not only by itself a multiple violation of personal boundaries, but also (that’s the second point): If you’re in that position, do you know where and when your attacker would stop? What his intentions really are? Try to think outside the clear rules of a game like Tomb Raider: Does he want to kill you, rape you, or problably “only” rob you? Especially if you have been assaulted before, you might jump to conclusions because “that’s what happened the last time”, even if may “only” be a light touch.

You have to assess the situation within seconds and react appropriately – and unfortunately (?), in reality, there’s no quicktime event, no reload, and killing someone is generally looked down upon. Also, in most instances, unlike Lara, you don’t just wipe off the dirt and get on with  your life. Depending on what exactly happened, you will need time to heal, physically but especially emotionally. You have to re-establish your boundaries, your self-confidence, your trust in other human beings. This may take therapy, or many hour-long talks with friends and family, or just lots of time. Speaking up against the offender or reporting him may help you deal with what happened, too. In the game, we never learn what Lara thinks about the incident – whether she felt threatened sexually, or not. But, either way, the only choice she gets is to kill the offender (if you win the quicktime event) or be choked (if you fail the QTE). As for “dealing with what happened”, this is it. There are a few instances in the game where we see an attempt of showing us how Lara deals with certain events (don’t want to spoil any details), but even that falls short in my opinion. And why does it fall short? The game promised to show how Lara became the heroine we know – and I’m sorry, but that’s not what’s we see in the game. What IS happening TO US never makes us a better, stronger person (emotionally; not talking athletics here). It may do the opposite – cause mistrust, depression, survivor’s guilt, self-harm, suicide, you name it. What CAN make us a better person is HOW WE DEAL WITH IT.  (Another good read on that, including statements from an expert on sexual violence: Penny Arcade Report)

So, regardless of whether Lara faces an attempted rape or “only” attempted murder (Did I just write that? Outside video games, it seems very, very wrong), she doesn’t get the slightest chance of dealing with it. It very much reminds me of how Shepard is resurrected from the dead in Mass Effect, with practically no explanation of how she (or he) deals with that. Shepard’s death and rebirth become as trivial as Lara carrying out her first kill when she shoots her offender in the face. Of course, unlike in Mass Effect, the story in Tomb Raider doesn’t allow for any prompt extensive processing of what happened, but if that is so, please don’t go around telling everyone how you are explaining Lara’s development. Just keep her suffering, moaning, groaning, getting impaled, choked, and burnt for the sake of our entertainment until she somehow turns into a killing machine. In other words: Don’t use rape in your stories if you can’t deal with it. 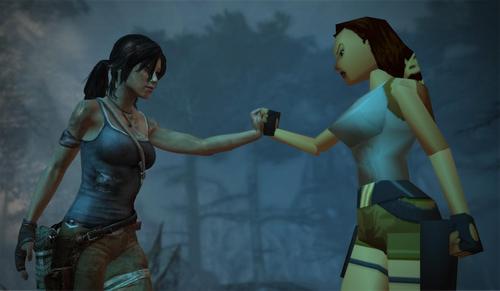 [Note: Of course, I don’t yet know the ending, so take this article as the analysis of something incomplete and probably inaccurate.]

Some more recommendations on the matter that didn’t quite fit into the text above: Dan Whiteheads Saturday Soapbox, Ashelias article on how for her, Tomb Raider did help with coming to terms with her own history.

6 thoughts on “The (Rise and) Rape of Lara Croft”