Last Monday, on April 16 2012, I presented my MSc thesis to the Danube University’s committee. I’m happy to say it went extremely well. 🙂

My thesis is about:

Now let’s be clear: My thesis is 160 pages cover-to-cover, so these are very limited, selected results.

Immersion:
“How do technical parameters define a platform’s aesthetic, and in further consequence, immersive potentials?”

Transmedia Storytelling:
“What are the transmedia potentials of a multi-platform game franchise?”

These were the platforms I selected, and the reasons why: 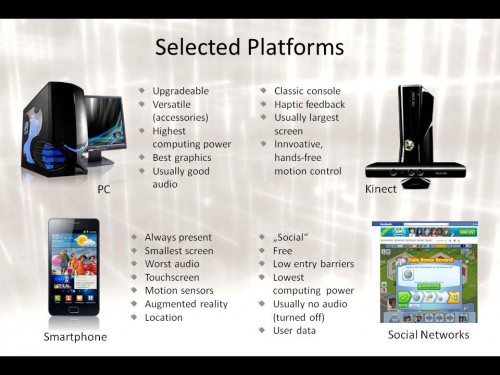 I’ve conducted a comparative analysis of these platforms in the theoretical part of my thesis, and then asked questions about them in general, as well as related to Assassin’s Creed, in my online survey.

Here are some results of my survey: 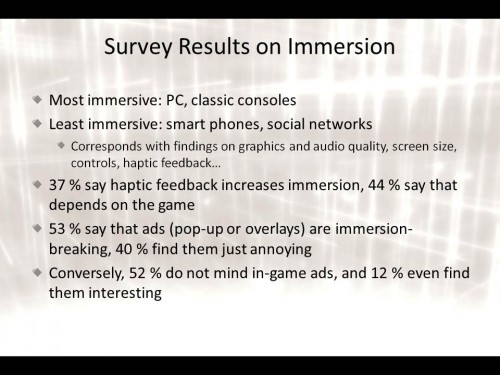 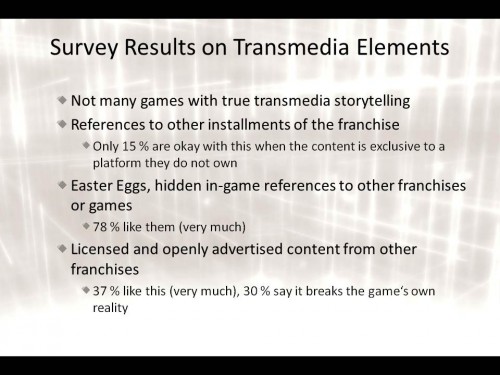 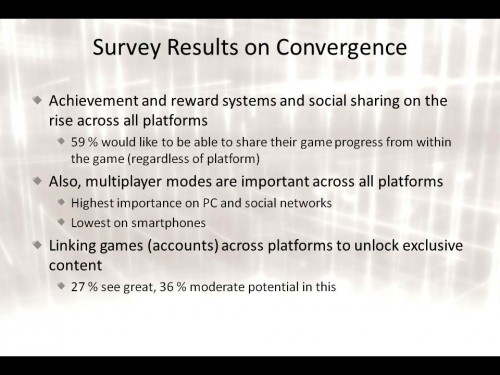 Now, since the context is a bit less academic than within my thesis … if you do not know Assassin’s Creed, go play it – the respondents of my survey agreed that AC2 was the best one. And if you can’t, check out the Wikipedia article or look at some YouTube videos.

Now, these were my main observations about Assassin’s Creed on a few selected platforms: 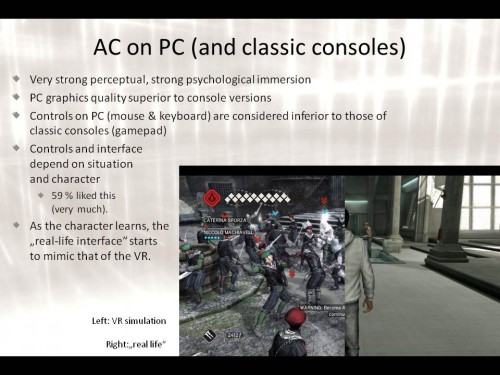 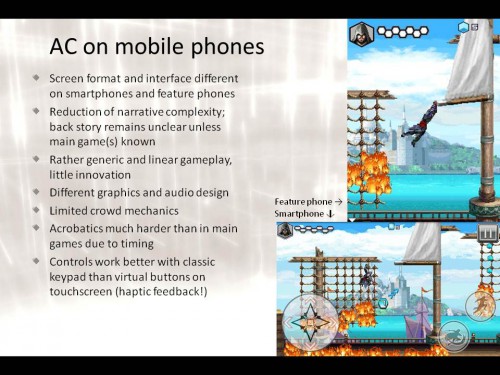 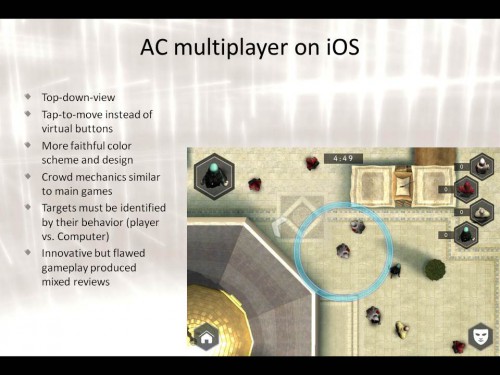 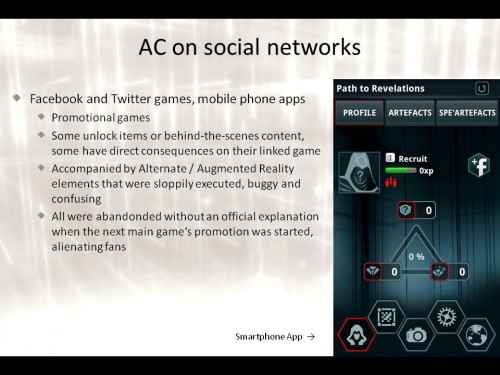 Now, let’s finish this up with a selection of conclusions about the three main topics: 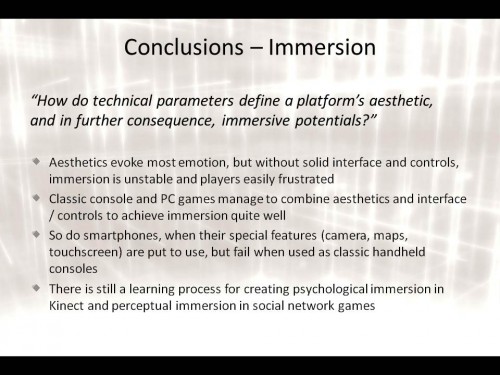 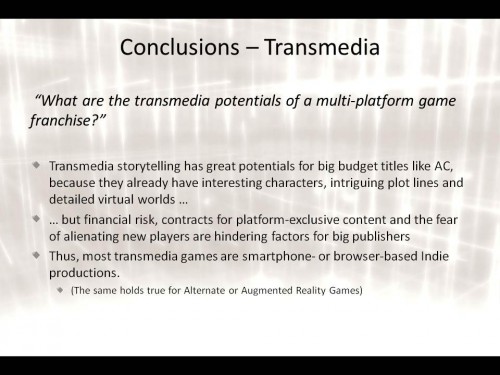 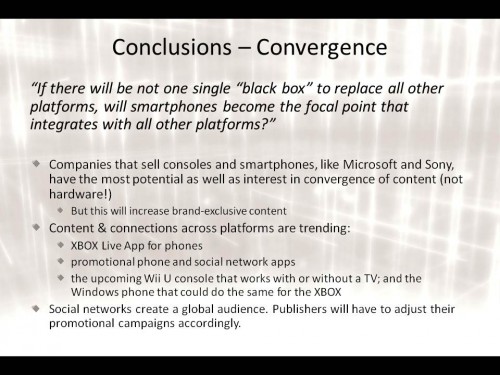 That’s it for now. 🙂 If you have any questions, let me know in the comments!

[This is a very old post. In the meantime, I have written my Master thesis about the games. Should follow up on the topic of women in AC soon.]

I love Assassin’s Creed! I don’t know how the game has slipped past my awesomeness-in-games radar (I suppose it “blended”, but more on that later), but it happened. And so, after my brother David mentioned it to me, I started playing, and finished today… and while I really enjoyed the game, my experience of the characterization ranged from great to greatly frustrating.

This post will contain plot spoilers for Assassin’s Creed! You have been marked… I mean, warned!

I have not yet played Assassin’s Creed 2, so if you have and wish to comment, please add a spoiler warning as well. And take note that I can only assume what happens with the characters next, so don’t judge me!  😉

In Assassin’s Creed, you play an assassin, Altaïr Ibn-La’Ahad…

Sounds logical, no? But, “you” in that case is not you, but “your avatar”; as in “your avatar plays an assassin”. In fact, you’re an average Joe named Desmond Miles, who was kidnapped because one of his ancestors, the Assassin Altaïr’s memory holds information vital to the kidnappers. So Desmond is forced to use the Animus device, which “can access genetic memory” to relive Altaïr’s dangerous life in the Holy Land.

Most of the game action happens in the past storyline, you switch to the present in “interludes”, after you finished one so-called memory block. So in three cities in the Holy Land, you gather information on your targets through pickpocketing, eavesdropping, interrogations or helping your clan brothers, and then assassinate them. You can either roam the streets, or climb the rooftops and towers like a mad monkey (side note: You can’t swim! I had to LMAO!). You often must stay undetected (via the “blend” mode I’ve alluded to above), or guards and templars will be on your heels. It gets a bit repetitive, but the atmosphere is really great, and the setting is quite unique, as the Animus’ tech bleeds into the past. The story elements are rather sparse, but enticing enough to want to go ahead – and even though I’ve played RPGs for many years, I didn’t expect this ending: awesome! In the present storyline, your options are really limited. You can talk with one of your captors and his assistant and find out a few bits and pieces that may come in handy to get you out of your dire situation.

So much about the basic idea of the game. On to the characterization. Your Desmond/Altaïr is set as male, and you cannot customize anything. And that’s perfectly fine, since there’s a GOOD REASON to it. He’s not an AFGNCAAP with a male face, he’s got a “male personality”. Not that of a modern man, but one fitting, I think, for a gifted taker of lives living in the time of the Crusades. In the game’s manual, he is described as “Disciplined, focused, and bold.”

In the prologue, you have the highest level possible in Assassin’s Creed, but you mess up the mission out of carelessness and endanger your whole Guild. You are able to prevent the worst from happening, but are stripped of all your ranks and must redeem yourself to regain them. It’s one of the nicest ways to explain why you suck at the beginning of the first act – much, much better than that doggone amnesia cliché!

In the course of the game, we see Altaïr progress from a reckless, arrogant, overconfident egoist to someone who thinks about his actions, feels guilt and empathy for his victims, and helps out his brothers.

Altaïr fits the time he belongs to, and so I don’t mind being forced to play a male hero. That was the Good.

In the past setting, not a single of the more important NPCs is a woman.  One of your assassination targets claims you have killed men and women, but unless you accidentially kill a female civilian, the game doesn’t seem to want it to happen. Then, quite late in the game, one of your nine targets turns out to be a woman, so Altaïr spares her life and lets her go – I was relieved that he didn’t do it because she was female, but simply because she wasn’t who he was after. He and one of his brothers are surprised about her appearance, but we learn not who she is, or what her reasons are. It seems awkward, but perhaps we learn more in the sequel?

Most of the civilians simply go about their way and you can either use them to blend in, or shove them around if you don’t care about drawing attention from the guards. Some women are carrying jars on their heads, some men carry crates of some kind, and if you shove these people, their stuff breaks and they will make a fuss about it. Then there are a few special types: Scholars or damsels in distress that are being harassed by guards, whom you have to kill to save the civilians. Drunkards and crazies, who are always male and will in turn shove you around, causing you to break your cover; and beggars, who are always female and will whine on and on and block your way until you want to do them in.

[Update/Edit] Obviously, people not only think that, they do it. And post it to YouTube with a video description like “We all love to kill begger women, they deserve to die anyway…”. And there are several of these out there, but I didn’t find any video about killing the drunks or crazies. *sigh*

[Next edit: Removed the link since the YouTube video has been taken down. Hopefully because someone else found it objectonable.]

So far, so cliché: Men are either aggressive, or scholars. Women are helpless whiners. It bugs me, but I can live with it, because it is plausible in that time and setting, that women simply didn’t gain any kind of important position (which could make them a target for our Assassin). That was the Bad, or Nessecary Evil for authenticity’s sake. It’s sad that this one-dimensional characterization causes unnecessary (factually and game-wise) violence against female civilians. [Update end]

But let’s go Back to the Future. Err… present. Desmond is described as “Independent, introverted, and defensive” and cynical in the game’s manual. So far, I experienced him as rather bland compared to Altaïr, and as giving in to his situation too easily. But that’s not my main problem with the present storyline in Assassin’s Creed. It’s Lucy, the assistant of your captor, and also one of their victims.

Lucy simply reeks of cliché. Blonde, pretty thing? Check. Victim? Check. Caring? Check. Obedient? Check. Okay, so she’s a scientist… but she’s in a field that is considered pseudo-science. Reminds me of the “only women are into astrology” cliché. This all made me hate her character. That was supposed to be the Ugly.

Made me hate her… until the very last interlude: She not only saves Desmond’s life, but she secretly reveals to Desmond (or rather “us”, the player? I’m not sure, as Desmond doesn’t comment on it) that she is an Assassin, too. Was she putting on a cliché face the whole game, and fooled not only the meanies, but also me? I will turn the tables in Assassin’s Creed 2: Just as Altaïr had to redeem himself in the first installment, I will give Lucy a chance to redeem herself in the sequel. Until then, the verdict is suspended. (But the post title stays, I like my allusions!) So this is, why I said above that “my experience of the characterization ranged from great to greatly frustrating”. Lucy was the most frustrating part, but perhaps her disguise was so good that I should actually also consider her characterization as great. Well done, Ubisoft! Thinking about all that, I love the game even more than before!

What did you think of the characters in Assassin’s Creed? (Remember: Comments that include spoilers from AC2 should have a warning!)